If there were one thing that makes or breaks a city for me, just one thing that determines whether I fall in love with a place or feel completely unimpressed by it, that thing would be food. And if you’ve read any of my past blog posts, you probably already guessed that’s what I would say.

Since many of you reading this post are travelers yourselves, right now, think back to that trip where you had the time of your life, that trip that you’re always thinking about and won’t ever shut up about. I’d almost put money on the fact that while you were just thinking about that trip, you thought about something along the lines of the unforgettable local cuisine you ate over drinks and laughs with family or friends. Didn’t you? In a new city, stopping to taste every morsel I see not only helps me get to know a place and its culture, but also it makes for the perfect day. When I chose to visit Prague this January, I decided I wanted to do a food tour, which is something I had never done with an actual tour guide before. I contacted Krysti Brice, an American writer, tour guide, and foodie who’s been living in Prague for over two decades. Together, we made our way through the foodie scene in Prague, trying the street food, passing the time in cafés, sipping hot drinks and nibbling pastries, and along the way, also feasting our eyes on Prague’s beautiful sights and surprises around every turn.

Of course, a day of eating is only as good as the food is, but let’s just say that Prague did not disappoint. I could hardly move by the end of the day, and I don’t even want to think about my caloric intake, but my food tour with Krysti of Exclusive Prague Tours was by far my favorite day in Prague and maybe even the greatest day of my latest trip to Europe.

After I grabbed a quick breakfast at my hotel, I set out to meet Krysti. We started this glorious day dedicated to our love of food bright and early at 10 AM and we walked the city and ate until well after sundown. Every place we went served delicious food and drinks, and I honestly couldn’t imagine a better day than that.

We started the day at a super cute café, Choco Café. I’d heard of Prague’s hot chocolate before and I knew that it wasn’t like it is where I’m from, so I kind of expected what was coming… But wow, it was seriously thick, like you had just melted a chocolate bar into a cup and drank it. I know that might sound weird, but it wasn’t; just different! It really was delicious, though plenty rich and decadent, too. Try it out, and maybe order some whipped cream on top, like Krysti did, to give it some creaminess! As we walked to our next destination, Krysti pointed out her favorite place to get coffee in the city, Café Ebel. She claims that it’s the best coffee in Prague! I didn’t try it for myself, but I figured I’d throw it in this post for you guys in case you’re coffee lovers (I definitely am not!). Krysti showed me through some back streets and pretty alleyways of Prague to avoid the hoards of tourists, of course, but also to show me a side of Prague I probably wouldn’t have seen on my own, and all the while she told me everything she knew about the cuisine, restaurants, and specialty food shops in Prague, and also about its interesting history in general. We meandered through the cobblestone streets until we made our way to Prague’s Old Town, and lucky enough for us, the Christmas market was still in full swing, cooking up all kinds of street food that filled the entire square with pleasant aromas of meat grilling over charcoal and dough frying for langoše (a typical Czech treat). And on a side note, could there be a more picturesque, beautiful place to spend your morning? And inside a Czech Christmas market, no less?!

We spent some time moseying around the market and looking at all of the food and handmade trinkets. Naturally, I couldn’t resist trying some Czech street food, so I grabbed a skewer with juicy chicken, onions, and thick bacon, served over a crispy bun. I probably would’ve eaten one more if I hadn’t needed to save some room for the rest of the day. It was still early – I had to keep reminding myself of this. After we’d had enough of Prague’s Old Town and the market, our next stop was a little pastry shop called BAKESHOP. They had the prettiest cakes and cookies I’ve seen, and Krysti encouraged me to try one of their croissants. I picked up a croissant sandwich filled with apple slices and Brie cheese. Yum, yum, yum. Hands down, best croissant I’ve ever had. So sorry, France. 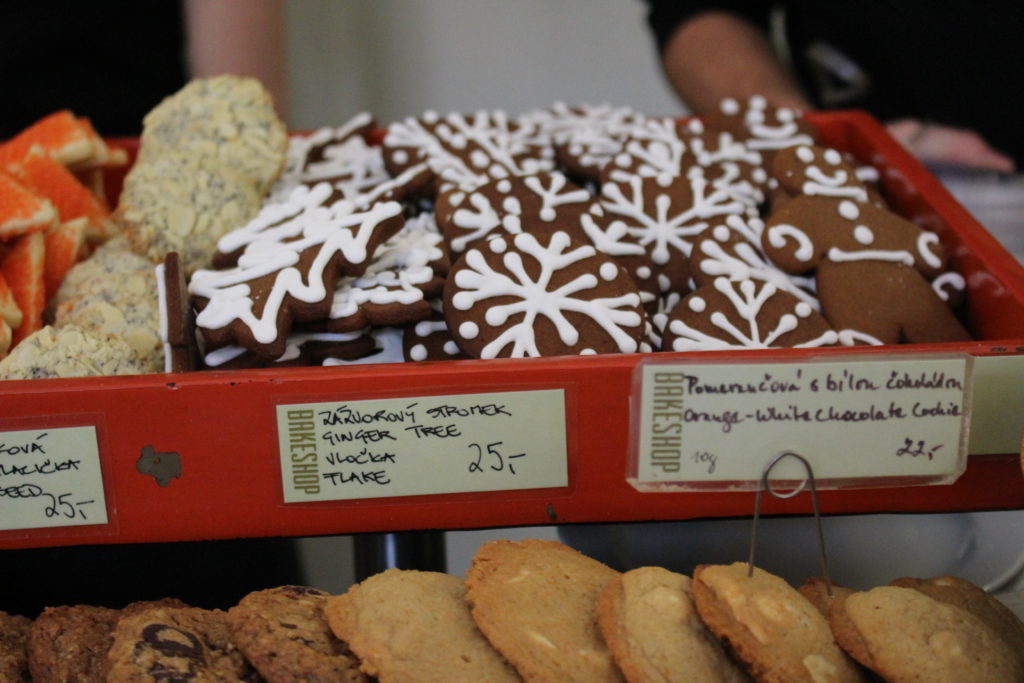 So at approximately 11:45, I was pretty damn full, which obviously was a bit of an issue considering we had about 8 hours of eating left to do. But whatever. I had to keep going. I would rather have eaten myself into a coma than spared my poor stomach and foregone eating any Czech delicacies that happened upon me that day. Onwards!

On the way to our restaurant for lunch, we took a walk through Gourmet Passage Dlouhá (Gurmet Pasáž Dlouhá), which is a passage where you’ll find nice shops and eateries featuring both local and international high-quality food and drink products for gourmet food lovers. I loved it in there; make sure to check this place out! Lunchtime! Krysti chose a great local place for lunch, and ironically, it was called Lokál. This place is very busy inside because it’s good; next time I’m in Prague, this is where you’ll find me. I tried a very typical Czech dish whose flavor combination surprised me, but it really was a special dish that I would gladly eat again and again. The dish on the menu was described as “roast beef with creamy sauce and cranberries” for 149 CZK (about $6 USD). I only got a half portion because there’s no way I could eat a whole plate, especially with all of those delicious bread dumplings. The sauce over the meat with the whipped cream and cranberry topping brought a very sweet, yet savory flavor to the dish, which I wasn’t expecting with my piece of roast beef, but I loved every bite. Along with a frothy glass of Pilsner Urquell beer from Lokál’s beer tanks, this was one of those memorable meals that I’ll look back on for years and still find my mouth watering. After lunch, Krysti and I definitely needed a break from eating, so we strolled through Prague’s beautiful Jewish Quarter, and later, we crossed the Vltava river to check out the food scene over in the historic Lesser Quarter, or Malá Strana. Quick tip: Make sure to explore both sides of the river while in Prague; there is so much more to the city than just the Old Town and the Charles Bridge! Next stop, Café Savoy for some coffee (or in my case, tea) and typical Czech dessert! In Krysti’s words, “this is the place to see and be seen in Prague.” The inside of this café had a cool vibe; in the back room they have wine on display across the wall, and a beautiful mural on the ceiling, finished with chandeliers. I had some hot tea made only from freshly picked mint leaves and hot water, which I loved (especially because it soothed my sore throat). For dessert, we sampled some mini větrníks and vanilla větrníks, which are basically yummy cream-filled Czech pastries. After dessert, the sun was inching its way down and we had some time to kill before our dinner reservation. We decided to walk about Malá Strana and look around a bit, and I’ll just say that there’s really only one thing that might be prettier than Prague in the daytime: Prague lit up and glowing at dusk. In Malá Strana, we walked the cobblestone streets and stumbled upon the Gingerbread Museum, which really is just a super cute gingerbread shop whose cookies feature the most intricate designs. It was worth a look around, and plus, gingerbread is big in Prague! After a long day of walking around, taking in Prague’s never-ending beauty, and eating way too much, it was time for a remedy to two of those three things, and since this was a food tour, you can guess it couldn’t have been the third one. Time for dinner, time to relax in a comfy chair and have some wine, oh and to eat more, of course.

For dinner, we strayed from the typical Czech cuisine we’d been indulging in all day long, and instead, we had French-Asian fusion food at a hip restaurant called Nostress (which had a cool art gallery downstairs, by the way). I like Asian food a lot, but French and Asian food combined? Hmm… Interesting. What is that even like? I chose beef with peanut curry and chinese noodles, so in my case, I’m not sure where the French part came into play, or if it even did at all?! But either way, I love anything with curry, so this was an awesome dinner. 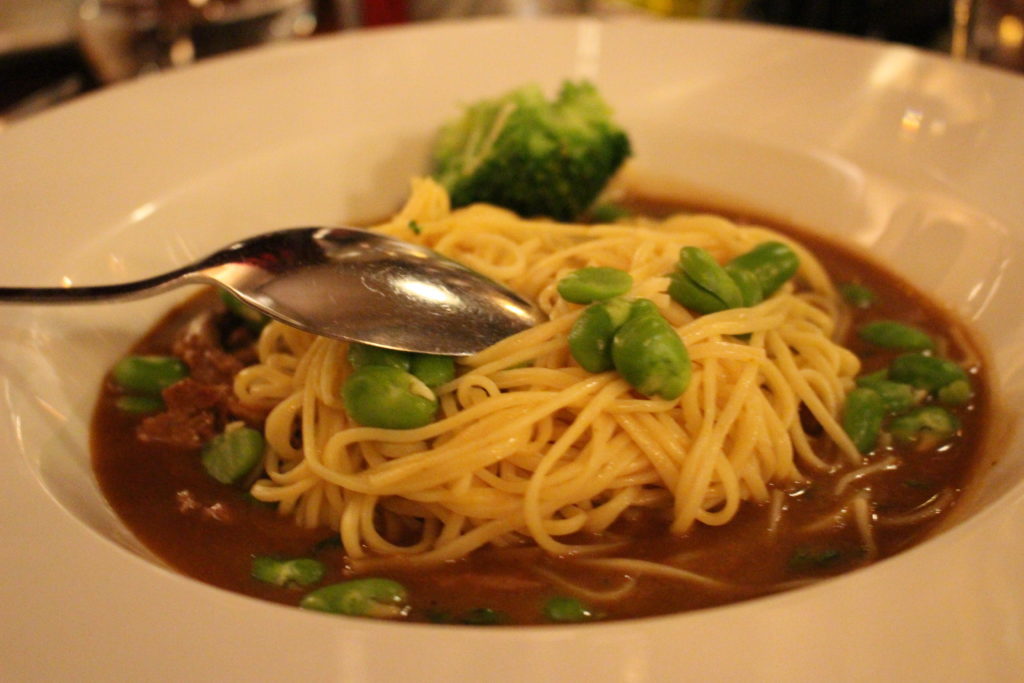 After we had finished eating dinner, I was more than ready to get back to my hotel and sleep for the next four days. I definitely ate enough to last me for the next week or so; that much I know for certain.

Eating my way around Prague with Krysti from Exclusive Prague Tours was my idea of a perfect day abroad. I’m not sure how life gets better than walking around a beautiful, historic city and eating lots and lots of good food (but if you have an idea, do let me know). From beginning to end, from the architecture to the food, Prague impressed me, and hanging out with a local who knew all the secret hot spots definitely helped out!

If you’re visiting Prague any time soon then I would definitely recommend contacting Krysti ([email protected]) for a private tour. She will plan a day exclusively for you, catering to your specific interests, just like she did for me with my food tour!

Travel Alphas embarked on a food tour as a guest of Krysti Brice and Exclusive Prague Tours. As always, all opinions are our own.

The Best of Barcelona: Tlaxcal