Fraser Island was the best two days of my life!

As we traveled down the East Coast of Australia, that’s the one thing we kept hearing, over and over again, from all of the travelers we’d met.

Based on those testimonies, we decided that missing out on Fraser Island was not an option. So we scoured the internet for the best tour, and when we came across the Fraser Explorer 2 Day Tour, we booked it straight away!

And then, we patiently awaited the day that we’d hop on the ferry to Fraser Island — the world’s largest sand island, and by far, one of the most adventure-ripe places you can go. 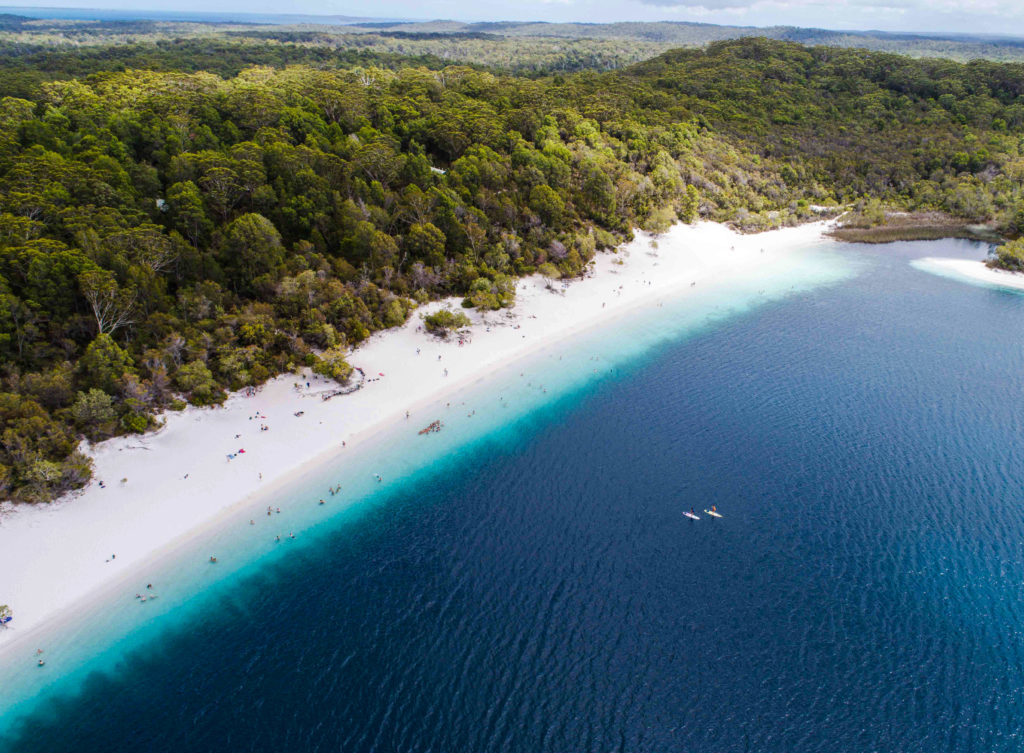 Now that we’ve returned from our tour, I can’t say I disagree with all of the travelers we met – even if it was raining for the better half of our time on the island!

Our two days on Fraser Island with Fraser Explorer Tours were absolutely incredible, and jam-packed with fun and adventure. No doubt, I would recommend this tour to anyone and everyone. Including you.

If two days full of four-wheel driving over sand dunes, tracking wild dingoes, swimming in stunning lakes, tubing down creeks, finding pythons in the forest, and exploring one of the world’s most unique ecosystems sounds like fun to you, then you can’t miss the Fraser Explorer 2 Day Tour.

And that’s just a condensed version of all the fun you’ll get up to on Fraser with Fraser Explorer Tours. 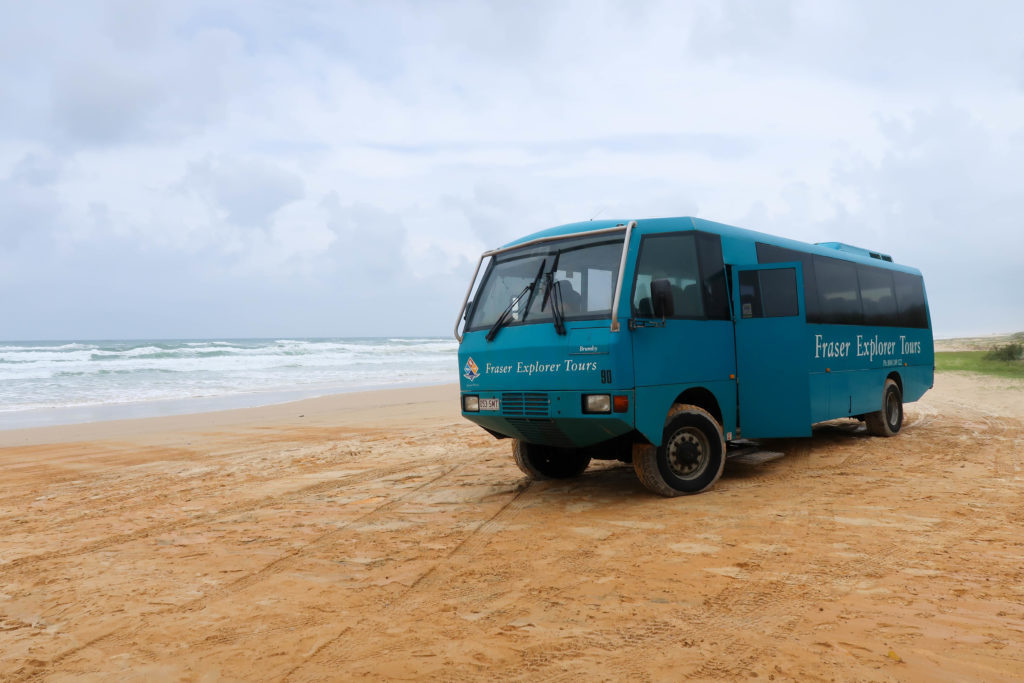 Early on a Wednesday morning, we woke up to torrential tropical downpours, and could do nothing but hope it would clear up.

In under an hour, our Fraser Explorer Tours driver would pick us up, and whisk us away to the ferry terminal, where we’d begin our two-day adventure on that beautiful, sandy island just across the bay.

After a quick ferry over from Hervey Bay, we immediately met our awesome and super-knowledgeable guide, Warren, and the beast of a 4WD bus that would traverse us over Fraser’s wild sand dunes and crazy dirt roads with ease over the next two days.

Wasting no time, we climbed aboard the bus, and away we went — thudding in and out of giant potholes and over bumpy roads — until we reached our first stop: Lake McKenzie. 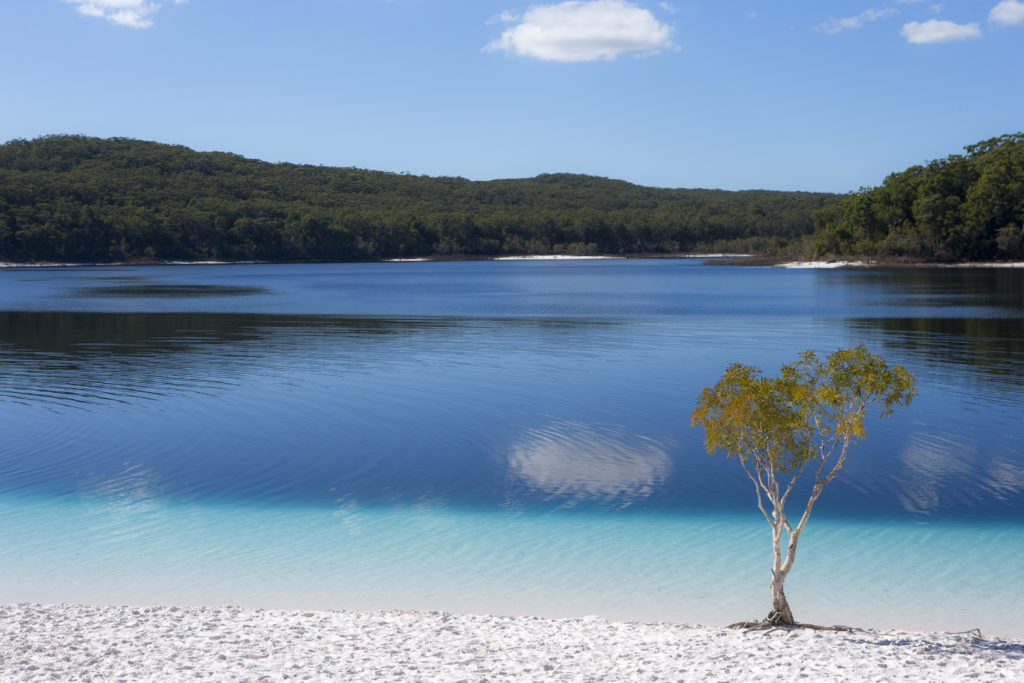 When we arrived at Lake McKenzie, Warren told us we had about an hour to hang out by the lake, swim, take photos, and explore.

And just like that, we knew that the Fraser Explorer 2 Day Tour would be different than all the other group tours we’ve ever been on; this wasn’t going to be a “take a picture here, take a picture there” kind of tour. Instead, we’d actually have time to enjoy each stop along the way. YES.

Our jaws dropped when our toes touched the soft, white sand, and our eyes gazed out at Lake McKenzie’s crystalline waters and lush jungle surroundings. We did not expect to find a lake this beautiful on Fraser Island – but as the trip unfolded, it became clear that Fraser had more than one surprising scene waiting for us!

For the next hour, we swam, took photos, and enjoyed hanging out on the sand… That is, until it started to rain again! 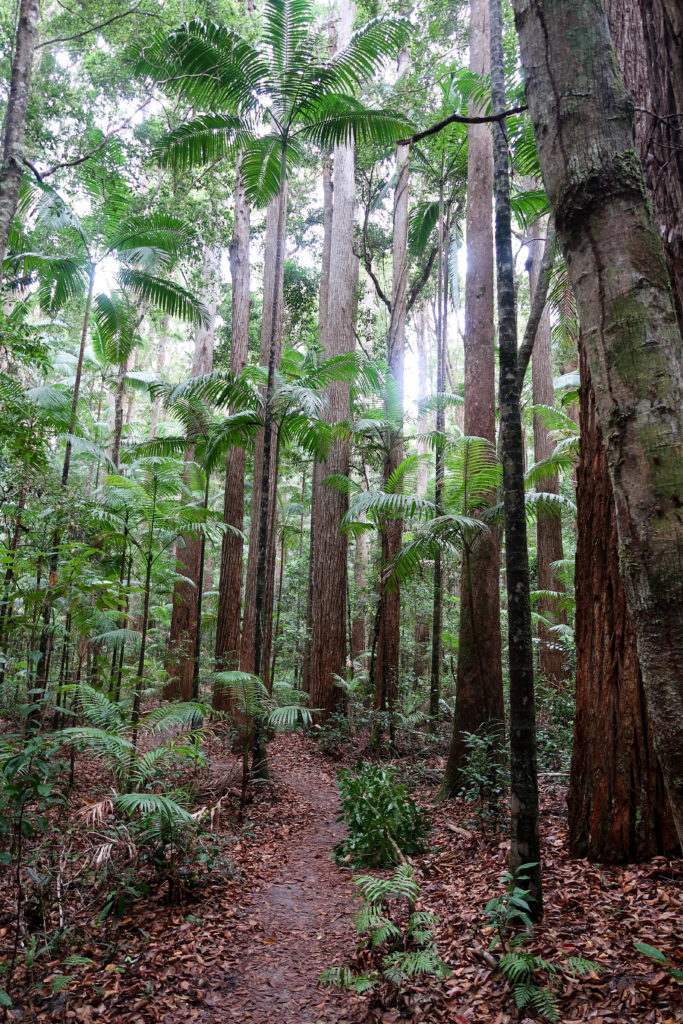 After a quick drive through the rain, we arrived at Central Station, a gorgeous rainforest that features a boardwalk along Wanggoolba Creek.

With 45 minutes to walk through the rainforest, we had time to really take in the flora and fauna, and gawk at the fact that it all had found a way to thrive in such a sandy ecosystem. The walk was so lovely, and luckily, the thick forest canopy shielded us from the pesky rain! 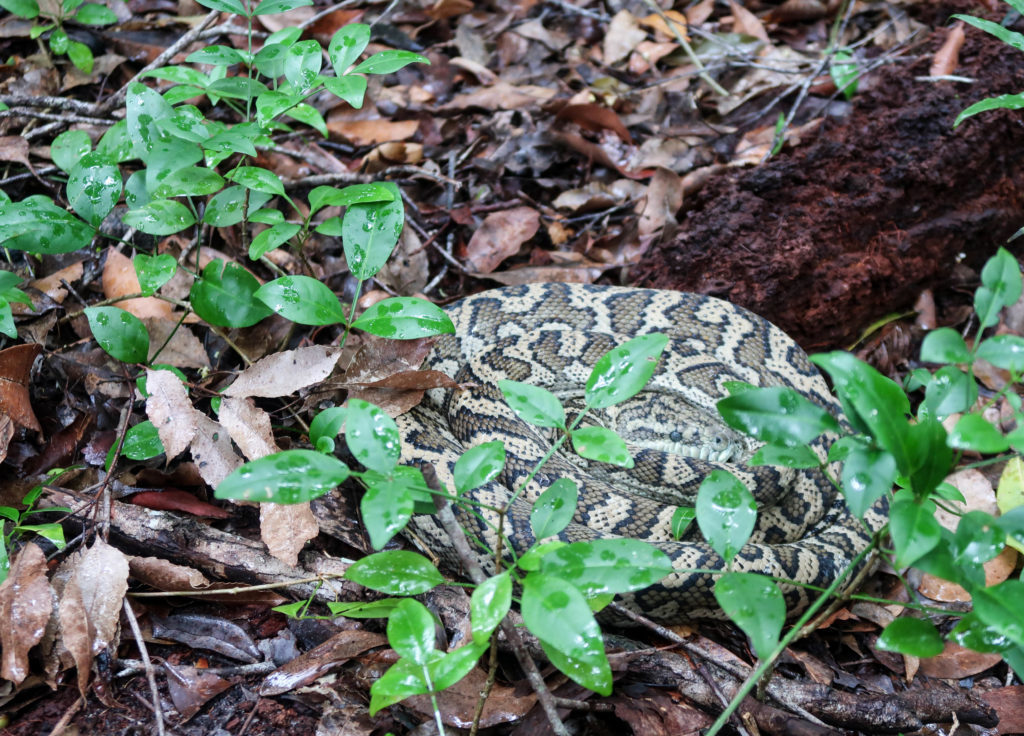 As we strolled, we even came across a sleepy python who was all coiled up and comfy.

He posed for all of our photos, and didn’t move a muscle – thank goodness!

On our way to our next stop, we finally saw what we’d all been waiting for: wild dingoes!

As we drove along Fraser’s 75 Mile Beach, we saw three dingoes roaming the sand, probably in search of food. For our safety, we couldn’t exit the bus and get an up-close look, but we could watch them inspect our bus curiously from the windows!

We all got a little snap happy with our cameras, but little did we know, we’d have many more dingo sightings to come on the trip – so much so, that their presence almost became commonplace by the end of our two days on the island! 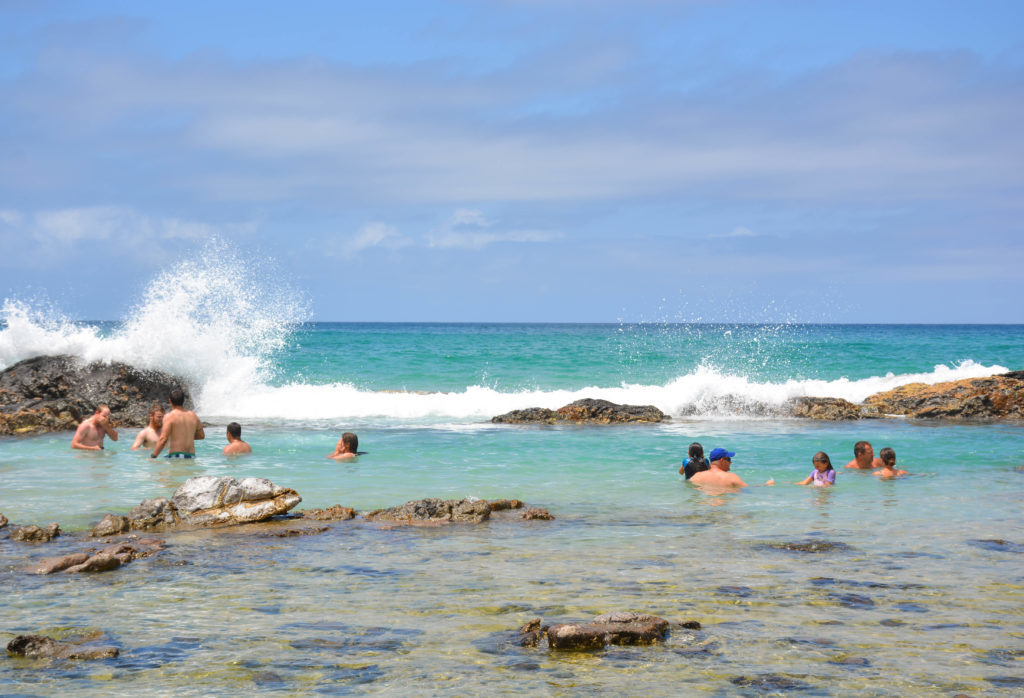 As far as I know, swimming in the ocean on Fraser Island isn’t allowed because the currents are too strong and dangerous. But there’s a pretty little workaround to that problem, and it’s called the Champagne Pools!

Warren took us to this little slice of paradise so that we could swim, and enjoy the champagne-like sea foam that fills the pools each time a wave crashes against the rocks. Even though it was something so simple, we pretty much thought it was the coolest thing ever.

We swam in the pools for a good thirty minutes before the wind picked up and the rain began pelting us like bullets from a close-range airsoft gun. And then we screamed in pain and laughter as we ran as fast as we could back to the bus… 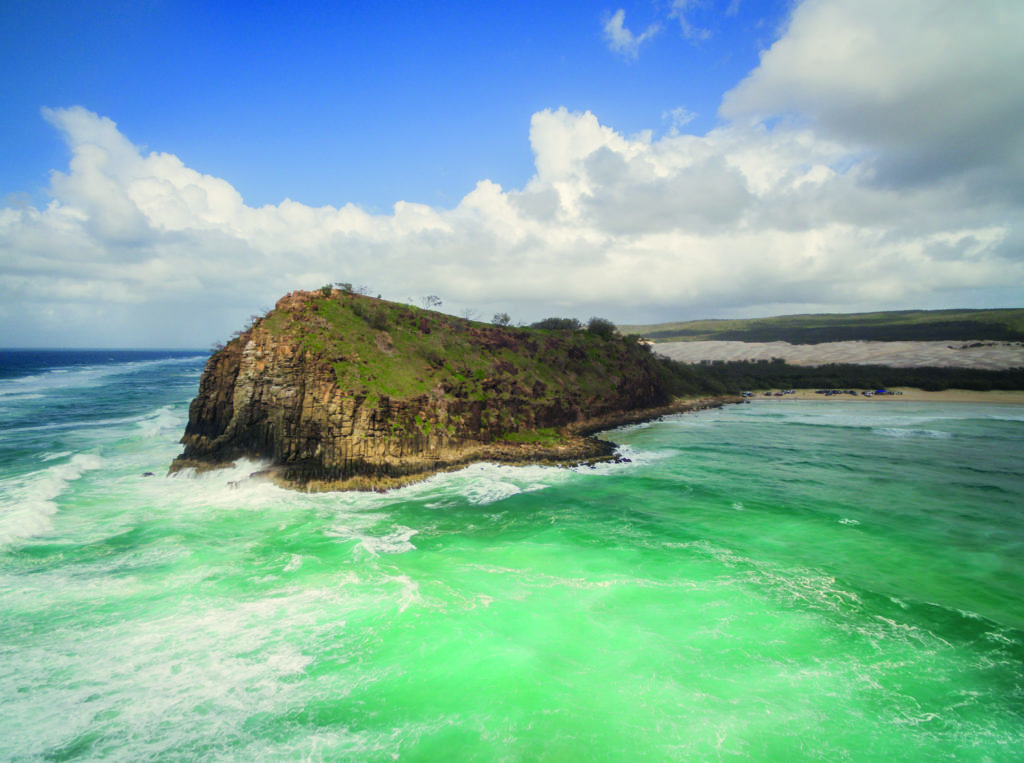 Next up on the tour was Indian Head, one of Fraser’s rocky coastal headlands, which seems to be everyone’s favorite place on the island.

After a short hike up, you will be rewarded with stunning panoramic views of Fraser and the ocean blue. And if you’re a photographer, then you will find yourself in absolute paradise! 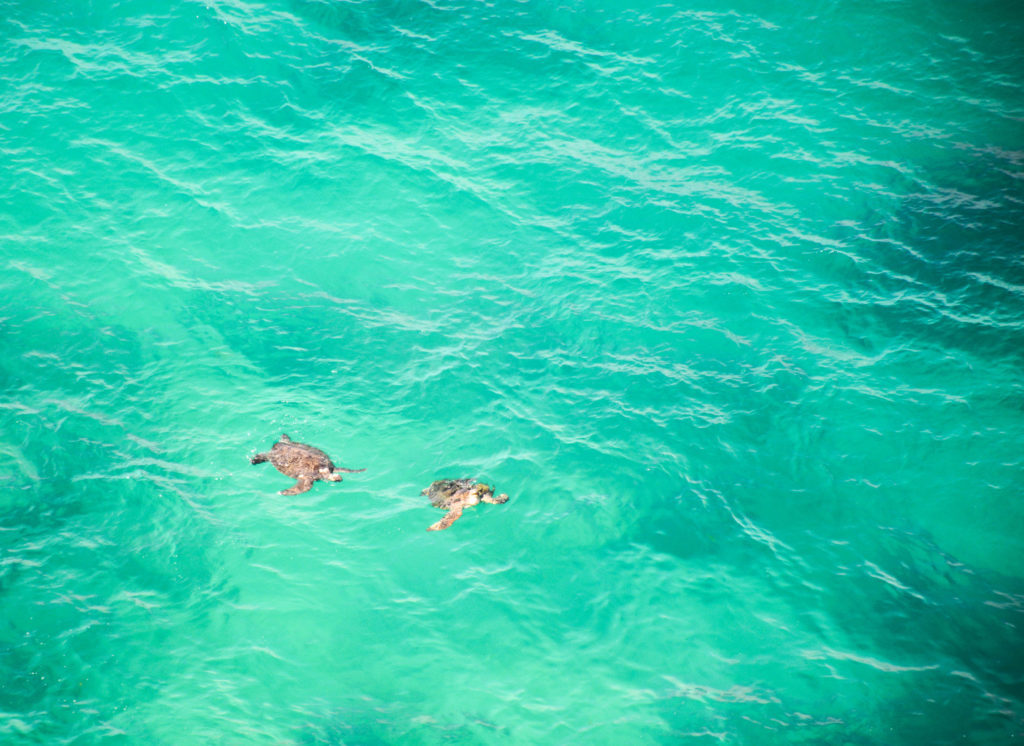 Indian Head is also one of the island’s best places to chill out and watch the marine life.

From there, it’s not uncommon to see turtles, whales, sharks, manta rays, and more, all swimming around and coming up for air.

After a long day of exploring Fraser, Warren drove us to our home for the night: the Eurong Beach Resort.

This resort, which features a swimming pool, bakery, restaurant (two lunches, dinner, and breakfast here were included in the price of our tour), beach bar, and general store, was the perfect place to stay.

Eurong’s basic rooms have everything you need for a comfortable stay, its beachfront location is perfect for a sunset stroll (just don’t forget a dingo stick!), and there’s even wifi available (for a fee), in case you need to connect during your two-day tour.

We stayed in one of Eurong’s Superior Two Bedroom Apartments, which I highly recommend for the air conditioning, spacious living areas, and big outdoor terrace! 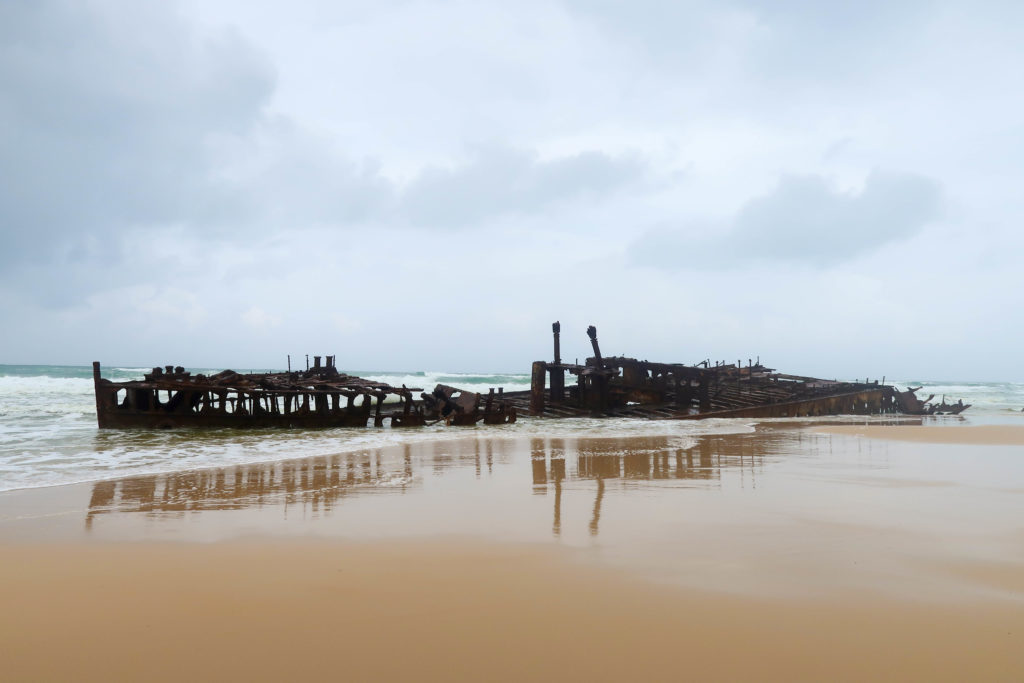 On the second day of our tour, it was time to visit Fraser Island’s iconic landmark: the SS Maheno Shipwreck! More than just a beautiful and eerie sight, this shipwreck holds over a century’s worth of history. Are you ready for a quick summary?

Built in 1905, the proud SS Maheno was the first turbine steamer to cross the Pacific. Later on, it served as a luxury passenger ship in the trans-Tasman trade (you can still see all of the fancy details under the rust), and between 1915 to 1920, it was even used as a hospital ship in World War I to transport and treat Allied soldiers from Gallipoli and the Western Front. After the war, Japanese shipwreckers bought the ship, and were towing it back to Japan when a rough cyclone hit; the SS Maheno then got lost at sea, only to turn up on Fraser’s 75 Mile Beach a few days later, in 1935. And on that beach it’s stayed, never to leave the shores of Fraser again!

We stopped at the SS Maheno for about 20 minutes to admire its beauty and snap a few photos, before heading off to the next stop. 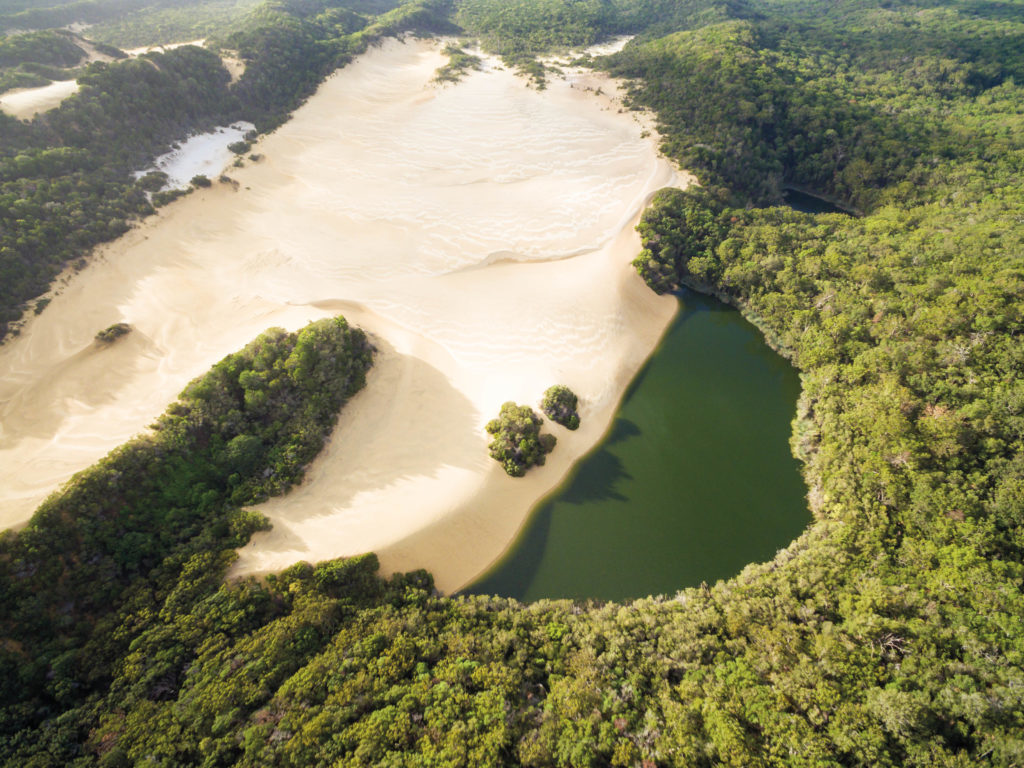 Even though it’s hard to choose, Lake Wabby and its surrounding dunes had to be our favorite part of the two-day trip.

When we arrived, our eyes lit up at the sight of the endless sand dunes, perfect for running around like children, and sliding, rolling, and cartwheeling down all of their perfectly wind-blown faces. 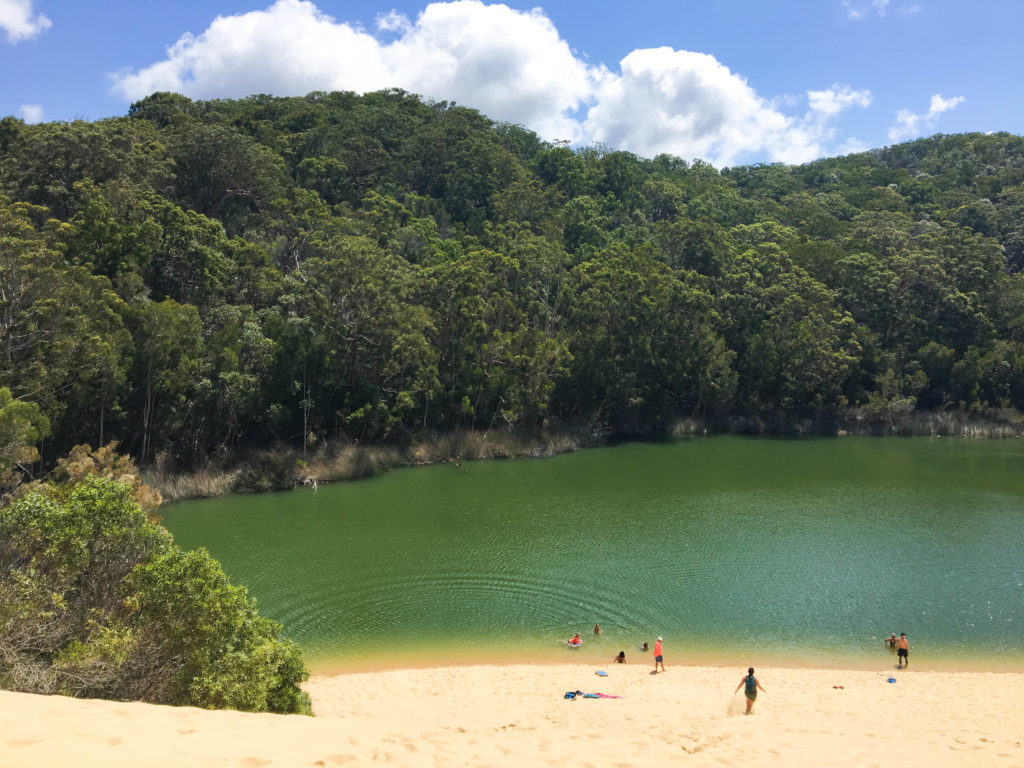 After we worked up a sweat – because yes, it was finally hot and sunny! – we went and cooled off in beautiful Lake Wabby. The water was definitely not warm, so it was super refreshing.

This freshwater lake is also home to several kinds of fish, and as we swam, we could feel the little ones sucking on our toes, removing all of the dead skin. So in other words, a fish pedicure is included in the cost of this tour…

After we dried off, we hopped back on the bus for one last adventure and crossed our fingers that Warren would let us stow away for his next tour. 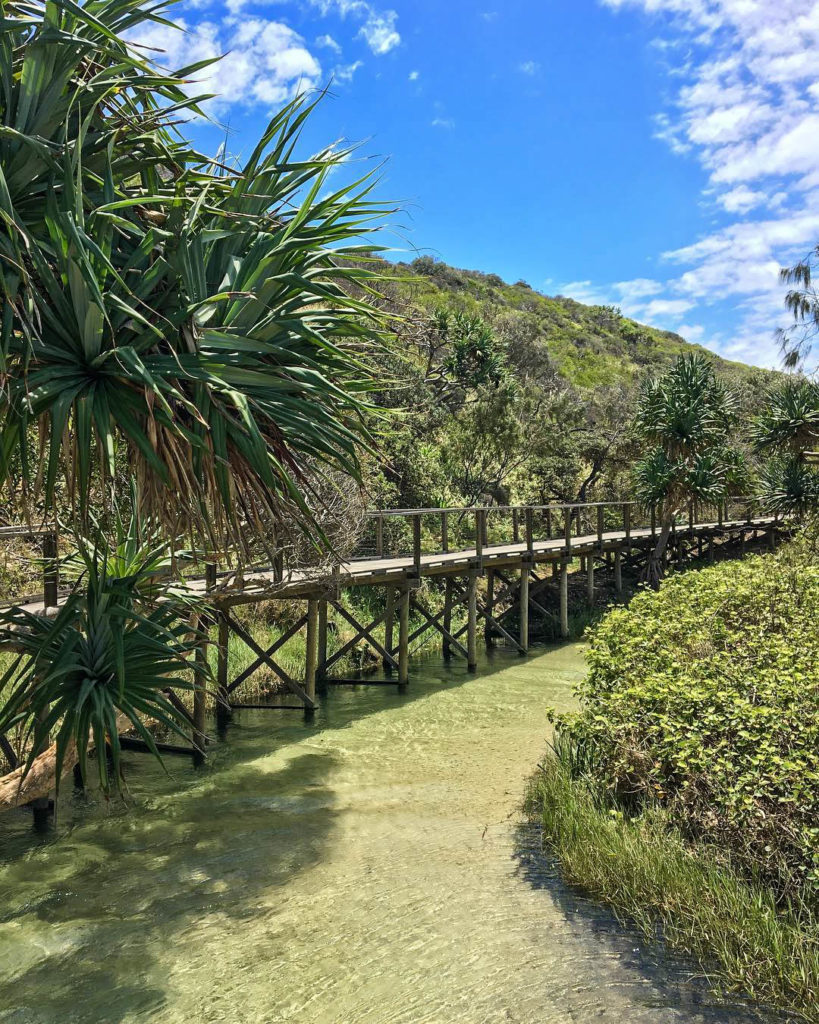 Our last stop of the tour was another major highlight: tubing down Eli Creek!

The water in Eli Creek was so cold and it started to rain literally as soon as we exited the bus… but we didn’t care! We grabbed a couple of tubes out of the bus’s trunk, ran down the boardwalk to the start of Eli Creek, and plunged right in.

We had so much fun racing down the creek in our tubes, swimming, and just chilling out.

After we dried off, Warren served us an afternoon snack of some tea and muffins, and then it was time to say goodbye to beautiful Fraser Island.

Even though we so wished we could have just one more day on the island — with our awesome guide Warren and our great group of travelers — our ferry would soon leave, and sadly, so would we. 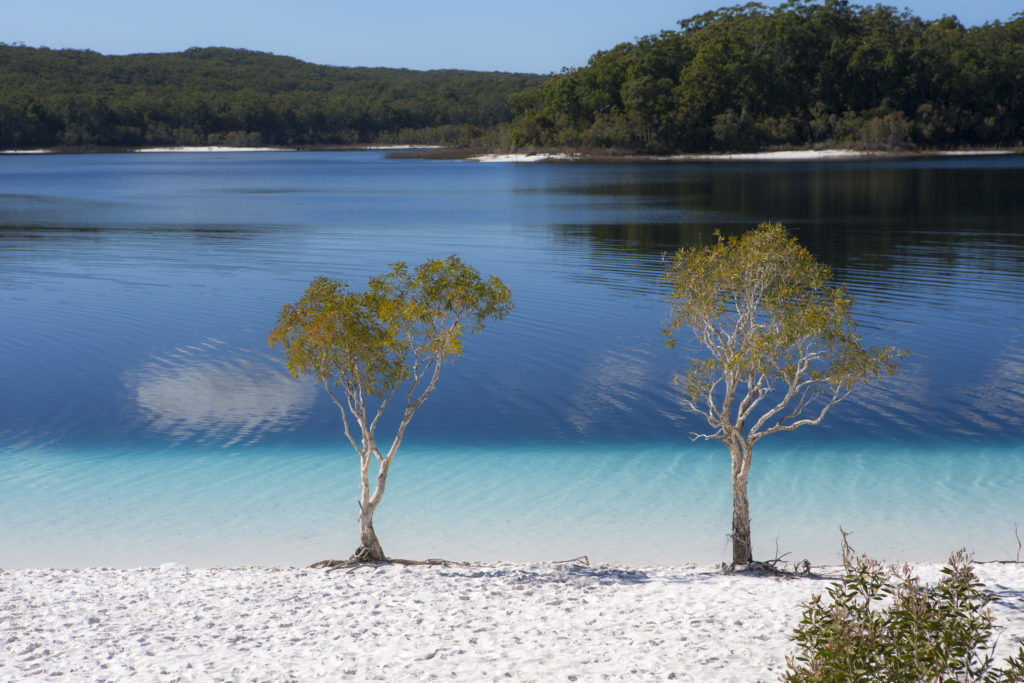 If you’re thinking about taking a trip to Fraser Island, then let me give you my best two words of advice: do it.

We made some of our favorite memories from one month in Australia on Fraser Island with Fraser Explorer Tours, and I know you’ll feel the same.

Click here for more information on the inclusions, prices, and availability of the Fraser Explorer 2 Day Tour! 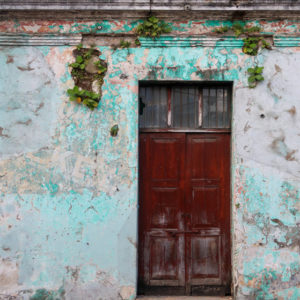