In July, we were in search of a little more adventure outside of Spain (our home base for the summer), so we researched new places, compared cities and prices, and came up with our top three choices. I really wanted to see Budapest, Mauricio preferred Vienna, and Prague was our back up, since I would be going there that coming January anyway. We couldn’t come to an agreement, so in the end, I gave into Vienna, thinking that, of course, Vienna would still be a great experience. So bags overpacked and hotels booked, we anxiously left our apartment, thrilled to see what adventure Vienna had in store for us over the next week.

We arrived in Vienna, and much to our surprise, we didn’t like it one bit. But that’s a story for another day. We couldn’t get out of Vienna quickly enough, so two days later we found ourselves in what became one of the most beautiful and beloved cities we have visited to date: Budapest. When I talk about Budapest, I usually find that 50% of people don’t even know which country Budapest is in, and the other 50% are probably wondering why anyone would want to go there in the first place. So I’ve come to a few conclusions about this tragic affair. The first, Budapest is so highly underrated, it’s utterly mind-blowing. I just can’t understand why. The second, everyone needs to at least know that Budapest is the capital of Hungary and its largest city. And the third, I must write a blog post emphasizing why every traveler should visit Budapest in their lifetime. 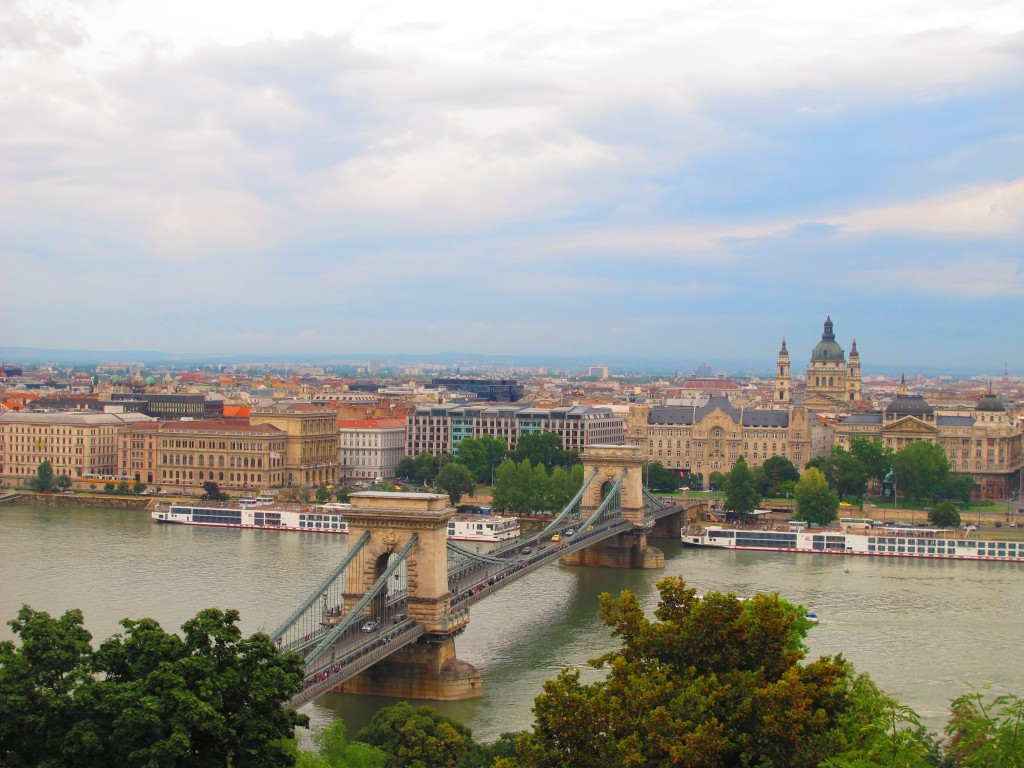 So here we go, the top 10 reasons that I believe Budapest is the most underrated dazzling gem in all of Europe:

Situated on both sides of the Danube River, Budapest’s panoramic views take your breath away. You can’t look around and not think that, in that moment, you’re one of the luckiest people in the world to be where you are. I was actually frustrated because I couldn’t take a photo well enough to really showcase Budapest’s jaw-dropping beauty. Please forgive me in advance for another one of my crazy food rants, but oh my goodness, I could’ve stayed in Pest forever just for its food. We don’t have any Hungarian restaurants near home so we’d never had anything like Hungarian food, but let me tell you now: Hungarian food is to die for. Budapest has so many amazing restaurants, you can’t go wrong.

I am a huge fan of soups and stews, so I definitely am an advocate of Hungarian goulash (gulyás). It’s a medley of deliciousness including beef shoulder, Hungarian paprika, onions, tomatoes, and more.

Then there’s chicken paprikash (paprikás) with dumplings, which is now one of my favorite dishes in the whole world. You simply must try it! While we were there, I indulged in chicken paprikash every chance I got.

Another highlight of the Hungarian restaurant scene is the homemade sparkling lemonade, a surprising explosion of flavors, usually consisting of soda water, lemons, limes, oranges, cucumbers, mint, and sugar.

An even lesser known fact is that Hungarians make great wine, so do yourself a favor and taste wine from Hungary’s Tokaj-Hegyalja region.

For dessert, treat yourself to a traditional apple or poppy-seed strudel or a kürtős kalács, which is a cylindrical pastry coated in cinnamon, sugar, and walnuts, and usually sold at outdoor carts. There’s something eerie about knowing you’re standing where hundreds of people were murdered, yet somehow, the city seems so unspoiled and pristine. You can feel the city’s history around you everywhere, trace the various eras through its architecture, and recall the past at the many memorials sprinkled throughout the city.

4. EVERYTHING IS CRAZY AFFORDABLE

First of all, we stayed at a really cute, family-owned, 3-star hotel, for 25 euros per night, which also included free breakfast, free WiFi, and free parking. We found that in some restaurants, wine and beer were cheaper than bottled water. A quality glass of wine would be about 600-700 HUF (less than $3) and a pint of beer is about 400-500 HUF (just under $2)! Each of our meals was nothing less than excellent, and none of them cost more than about $7. Taxi fares are reasonable and public transportation costs only about $1.50 per ride. Overall, I would say that Budapest is the most one of the most affordable capital cities in Europe.

We made a lot of friends in Budapest, some of whom we still chat with occasionally over Instagram! Everyone we met in Budapest happily taught us about their city, culture, food, and way of life. To me, everyone was friendly, helpful, and happy; those are my kind of people! 6. THE MUSEUMS AND MEMORIALS ARE UNFORGETTABLE

We visited a few different museums and memorials during our stay in Budapest, and they were all exceptional and incredibly memorable. The one that sticks out most to me was the Holocaust Memorial Center mostly because I was bawling my eyes out for the second half of it. It was intense. But I also think it’s something that everyone should experience in their lifetime. It was humbling, and I felt horrible when I left that place, but at the same time I felt grateful for everything I’ve been blessed with.

There are also plenty of other historical memorials and statues around the city, most notably the Shoes on the Danube and Heroes’ Square. We also visited the Hungarian National Museum, which allowed us to time-travel through all of Hungary’s important historical moments. The last one I’ll mention is the Labyrinth of Buda Castle, which is a system of caves and caverns under Buda, previously used as a prison where Count Dracula was once held. We were in complete darkness, equipped with only a hand lantern. There were creepy things like graves and coffins in there. Mauricio refused to go down the completely dark tunnels because I’m pretty sure he’s scared of ghosts! 7. THE ARCHITECTURE IS GORGEOUS

There isn’t much to elaborate on this one. You need only see the pictures, and then hopefully go see it with your own eyes. Budapest boasts architecture from every era, all overwhelming and all beautiful. Especially the Hungarian Parliament Building. It’s spectacular.

Budapest is called the ‘City of Baths’ because of its wealth of thermal springs, which possess healing qualities. Perhaps the most famous bath in Budapest is Széchenyi, but there are many other historical baths in the city such as Király, which is one of the smaller baths in the city, built in the 16th century by Turks, or Gellért, which is one of the most beautiful baths in Budapest with its Art Nouveau style architecture.

9. THE NIGHTLIFE IS BOOMING

The FIFA World Cup Championship happened during our stay in Budapest so everyone was really into it and it was a lot of fun! But going out in Budapest in general is fun and carefree. There are plenty of great bars and restaurants on Király street (and other streets too), there are bunches of cool clubs and discos all over the city, and during the summer months there are Spa Parties at the Széchenyi bath that get crazy, and the alcohol is cheap too. Another great option is to climb aboard a party boat and dance the night away on the Danube.

10. THE ATTRACTIONS AND ACTIVITIES ARE ENDLESS

We needed at least another three or four days in Budapest to get through everything we wanted to see and do. Like I said already, there are plenty of delicious things you can eat, amazing art and history museums to visit, many different architecture styles to admire, etc. On our next trip to Budapest we will conquer the rest of the city! Among the things we will do are spelunking (cave exploring) because Budapest has an extensive cavern system, see a Hungarian folk dance show, go to more museums such as Hospital in the Rock, which was a secret hospital during WWII and a nuclear bunker during the Cold War, and spend a night at one of Budapest’s Ruin Pubs.

I could actually keep listing reasons why Budapest rocks, and that’s why I limited myself to only my top ten! I hope that this post inspires you to consider Budapest for your next European exploration extravaganza. I seriously can’t wait for the day that Mauricio and I are blessed with an opportunity to return to that gorgeous city. And also, if you’re from Vienna, I apologize for saying your city’s boring and not the prettiest, but to each their own, right?

A Week in Belize: Relaxation & Adventure
Hiking in Bergen, Norway: From Mt. Ulriken to Mt. Fløyen
3 Days in Stockholm: The Perfect Itinerary for First-Timers

Travel Essentials: What’s in my Backpack?