Stockholm is the city of fourteen islands, the so-called “Venice of the North,” and is the home to one of Europe’s best-preserved old towns.

This beautiful capital city had been on my travel bucket list for quite a while, and I was so excited to finally check it off.

To wrap up an unforgettable mother-daughter trip to Norway and Sweden, we spent three incredible days in Stockholm.

We packed our three days in Stockholm full of wandering through quaint streets, visiting many museums, eating delicious food, and more.

If you’re planning to visit Stockholm soon, then this is the guide for you. In this post, I detail the best things to do, where to eat, and where to stay.

How to Spend Three Days in Stockholm, Sweden

At about midnight, we arrived at Stockholm Arlanda Airport from Bergen, Norway, and hopped on the Arlanda Express.

At only 20 minutes, this is the quickest way to reach Stockholm’s city center — though it’s probably the most expensive as well. A roundtrip ticket costs roughly $60 USD. For more information on the Arlanda Express, click here.

Where to Stay in Stockholm

We were incredibly tired at this point, but lucky for us, our hotel, the Scandic No. 53, was located on the same street as the Arlanda Express stop! Our hotel could not have been more conveniently located, because there’s nothing worse than scrambling to find your hotel, late at night, after flying in from another country.

If you’re wondering where you should stay during your three days in Stockholm, we highly recommend the Scandic No. 53. The hotel is centrally located, clean, environmentally friendly, and decently priced for Stockholm’s (when considering the hefty prices on just about everything in this city). The rooms are very small, but smartly designed to maximize space.

You can find other great deals on Stockholm accommodations HERE! 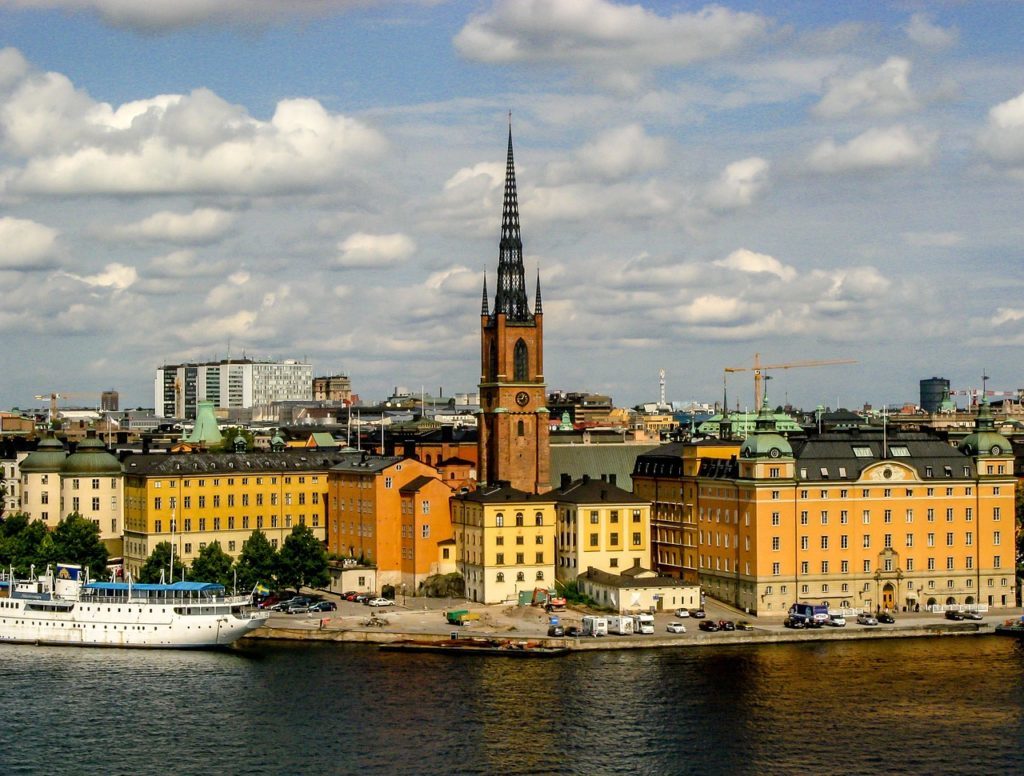 Three Days in Stockholm: Day One

After a good night’s sleep, we woke up, got dressed, and grabbed a quick breakfast and some coffee in the lobby. We were ready for our first of three days in Stockholm!

We decided that our first day of three days in Stockholm would be spent sightseeing, slowly and thoroughly. We wanted to get a feel for life in Stockholm and for the city, instead of just seeing the touristic sites (though we did do that, too!).

From our hotel, we strolled leisurely through Stockholm’s busy streets, browsing in and out of shops, until we reached the waterfront.

Gamla Stan is Stockholm’s Old Town, which is one of the best-preserved medieval city centers in Europe. In fact, the city of Stockholm was founded in Gamla Stan back in 1252.

In Gamla Stan, we spent a bit of time wandering the narrow and winding cobblestone streets, surrounded by old and colorful buildings.

If it weren’t for the souvenir shops in almost every other building, we may have felt as though we’d gone back in time about five hundred years.

As we gawked at the beautiful architecture and the cramped alleyways, I couldn’t help but wonder just how many souls actually lived and died in Gamla Stan, in the very place I stood; the amount of history preserved in Gamla Stan’s walls really just blew me away.

Gamla Stan is a must-see for any Stockholm visitor, not only for its historical architecture and picturesque cobblestone streets, but also for its great traditional restaurants and cute shops.

In Gamla Stan, resides the oldest square in Stockholm: Stortorget.

At Stortorget, you’ll find many people lazing about, having a meal or a fika, or just sitting and enjoying the sunshine and the picturesque scenery. Next, we moseyed back through Gamla Stan and over to Kungsträdgården, one of central Stockholm’s parks and a popular hang out spot among locals and tourists alike.

With spring’s arrival, Kungsträdgården was particularly popular, the park not only bursting with people enjoying the sunshine, but also with color as the cherry blossoms were in full bloom!

It couldn’t have been more beautiful, and it was apparent that the Swedes were enjoying the spring sunshine, after months of dark, cold, snowy days.

We sat on one of the many benches beneath the cherry blossoms and watched the frenzy of people taking photos of, and selfies with, the beautiful blossoms.

After our feet rested a bit, it was time to check out the area of Skeppsholmen and the gorgeous view from Skeppsholmsbron (or Skeppsholm Bridge), a historical landmark, complete with its iconic Gilded Crown.

From here, we could see the outskirts of Östermalm, Stockholm’s premier neighborhood, as well as Gamla Stan and Södermalm.

Our stomachs were grumbling, so we set off for La Neta, Stockholm’s best, authentic Mexican restaurant (I know this seems random, but it was delicious!) which had already been recommended to us by a few locals.

This was more of a feast than just a typical lunch, but what else was I supposed to do?! I’m a California girl; I love my Mexican food, especially when it’s as good as La Neta’s.

As you can see from the photos, this place is worth a visit. Or two.

Though it was possible to take a bus over to our next stop, we opted to walk, to see as much of the city as we could.

As a lover of all things photography, it was only fitting that our first museum visit was to Fotografiska, one of the world’s best museums dedicated to photography, and photography alone.

The experience was interesting, passionate, emotional, and even a little disturbing at times, and I highly recommend you to visit.

You can purchase your tickets to Fotografiska here!

As soon as we stepped outside, a beautiful sunset fading from pink to lavender dominated our view. What a perfect ending to our first of three days in Stockholm!

But wait, it wasn’t over just yet. It was dinnertime. My favorite time (other than lunchtime). 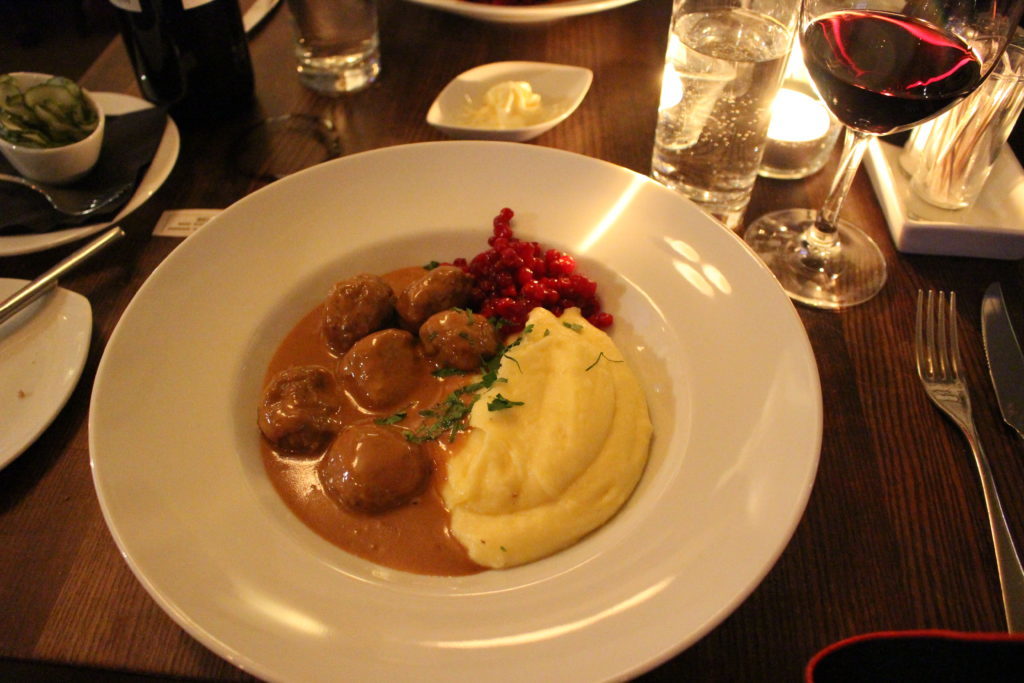 To finish off Day One, we figured we should grab a traditional Swedish dinner in Gamla Stan.

We stumbled upon a small restaurant with a traditional-looking menu, and sat down.

First, we started with a bottle of red wine! Then, we ordered the Jerusalem artichoke soup with hints of truffles and rosemary, followed by our entrees of Swedish meatballs with creamy gravy, mashed potatoes, lingonberries, and sweet-pickled cucumbers. Overall, this meal was superb.

This meal set the standard for the rest of the food during our three days in Stockholm, and we were never disappointed. After eating those meatballs, I couldn’t wait to eat more meatballs.

At this point, I knew for sure that I loved Stockholm.

Day two comprised of a lot of walking, a lot of sightseeing, and a lot of museums. So in other words, it was the perfect day in Stockholm.

After breakfast, we climbed aboard the 10:30 AM Royal Canal Tour boat, which floated along Stockholm’s canals, past many historical buildings and museums, and beautiful green parks.

This tour allowed us to see Stockholm from a different vantage point. And along the way, we learned many interesting facts about Stockholm’s history and people, that we wouldn’t have learned otherwise.

Next up on the itinerary for day two was the Royal Palace.

The decor inside the Royal Palace was mind-blowing, and a trip to Stockholm would not be complete without living as royalty does, if only for a few fleeting minutes. 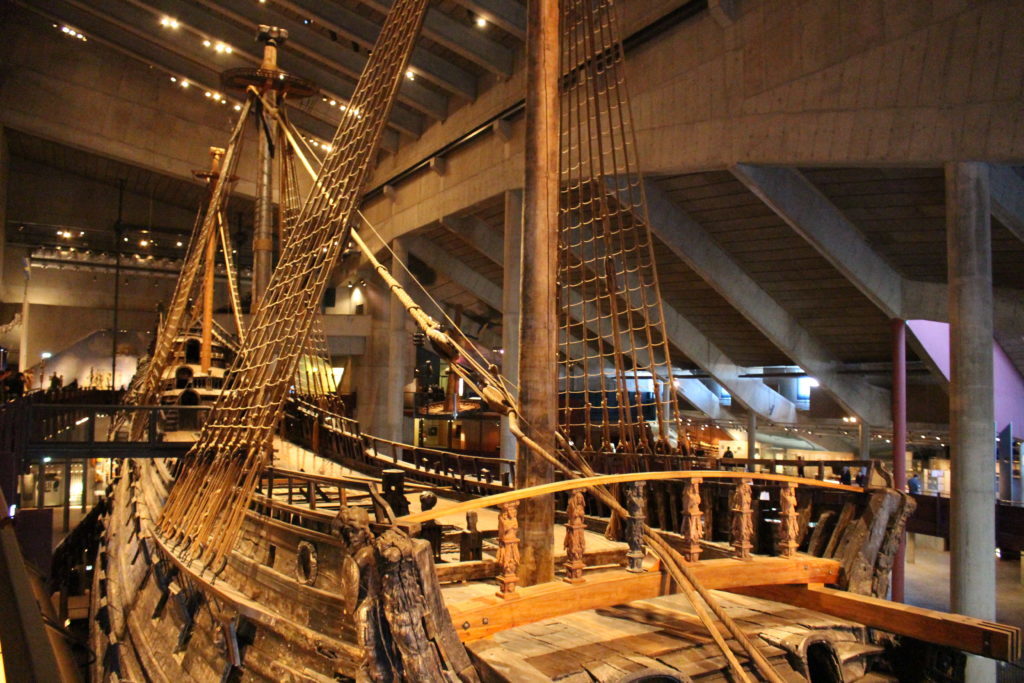 Next on day two’s to-do list were two very popular and impressive museums: Vasa and Skansen.

Vasa is the most popular thing to do in Stockholm. It’s an incredible viking ship museum which houses King Gustav II Adolf’s beloved Vasa, who sank on her maiden voyage in 1628. 333 years later, in 1961, she was pulled from the depths of the sea to be restored. Skansen is an outdoor museum showcasing Sweden’s culture and animals, making for the perfect afternoon on a sunny day.

We strolled past five centuries of Swedish history and spotted all kinds of Scandinavian critters, from reindeer and bears, to wolverines and lynx.

You can purchase your ticket to Skansen online here! Just outside of Skansen sat a bus stop which delivered us right back in the center of town, at Kungsträdgården, where the usual cherry blossom obsession continued.

From there, we walked over to Gamla Stan for another phenomenal traditional Swedish dinner at Restaurang Tradition.

Day two’s dinner consisted of Swedish potato dumplings with lingonberries and melted butter, and of course, Swedish meatballs with mashed potatoes and the traditional trimmings. Amazing. From that moment on, I decided that I needed more Swedish food in my life. Changing of the Guard

After a bit of shopping, we caught the changing of the guard ceremony at the Royal Palace. And yes, I know, this is a bit of a touristy thing to do, but hey, “when in Rome…”

It’s kind of a funny process to watch, though it is a bit long too. If you’re in the area around mid-day, make sure to check this out, even if it’s only for a minute or two. Next up on our list was a guided tour of Stockholm’s City Hall.

This tour lasted for about 45 minutes, showing us through the many rooms in which important banquets and political meetings are held, accompanied by a plethora of information about Stockholm, its politics, and its history.

Without a doubt, my favorite part of the tour goes to the Golden Hall, where the walls dazzle with more than 18 millions gold tiles. I can’t even begin to imagine how much this room is worth, but it sure was beautiful (and just a little over-the-top).

After a quick break at our hotel, we set out for our last activity in Stockholm: a Stockholm Ghost Walk through Gamla Stan.

On this tour, we learned about Stockholm’s war, murder, and ghost histories. Our tour guide was very entertaining, and he took us through parts of Gamla Stan we had not yet seen! 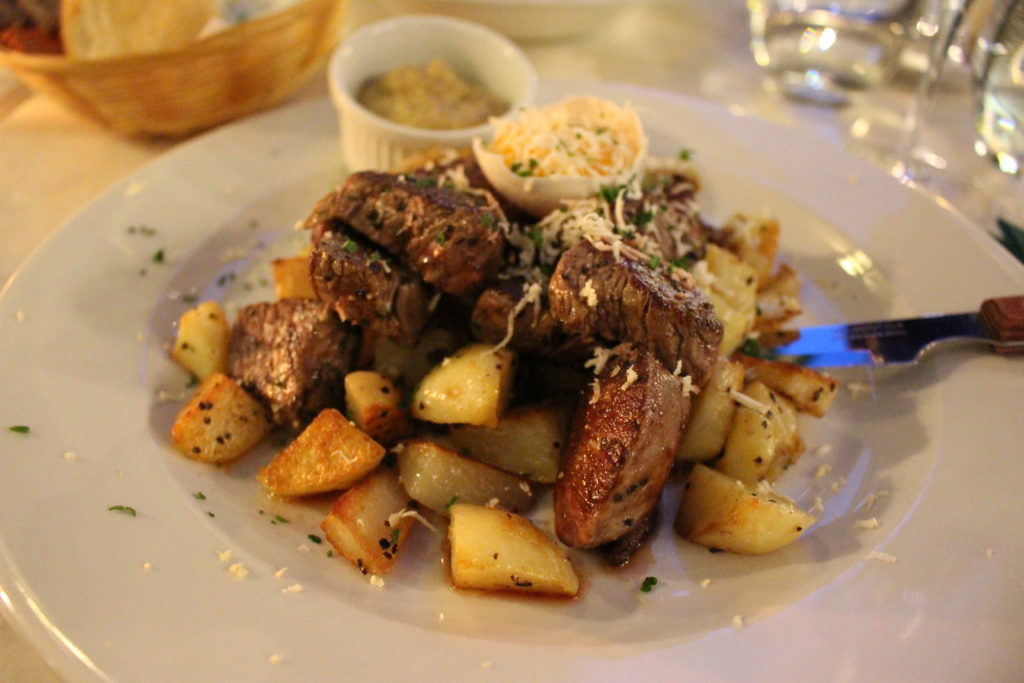 After the tour, we stumbled upon a delicious gem: Slingerbulten.

Here, we enjoyed one last traditional Swedish meal for our last night in Sweden.

Neither one could’ve tasted any better, and this meal, paired with a bottle of red wine, was the perfect end to our time in Stockholm.

In the morning, we’d be off to the airport, heading for Los Angeles. Nothing could’ve made our three days in Stockholm any better.

From our cozy, high-tech room at the Scandic No. 53, to the uninterrupted views of medieval Gamla Stan above dazzling seawater, to our tasty traditional Swedish meals, our three days in Stockholm were perfection.

Stockholm may have been on my travel bucket list before, yet nothing has changed; Stockholm remains on my to-do list. I can’t wait to return to Stockholm some day soon!

Maddy’s Avenue visited Stockholm as a guest of both the Visit Stockholm tourism board and the HTL Kungsgatan. As always, all opinions are our own. Should You Say Yes or No to Low-Cost Airlines?