Experiencing Norway in a Nutshell from Oslo to Bergen

Are you visiting Norway soon and thinking about embarking on Norway in a Nutshell from Oslo to Bergen? Well, if there’s only one thing that you absolutely must do while you’re in Norway, then that thing would be the Norway in a Nutshell excursion. Without any sliver of doubt. 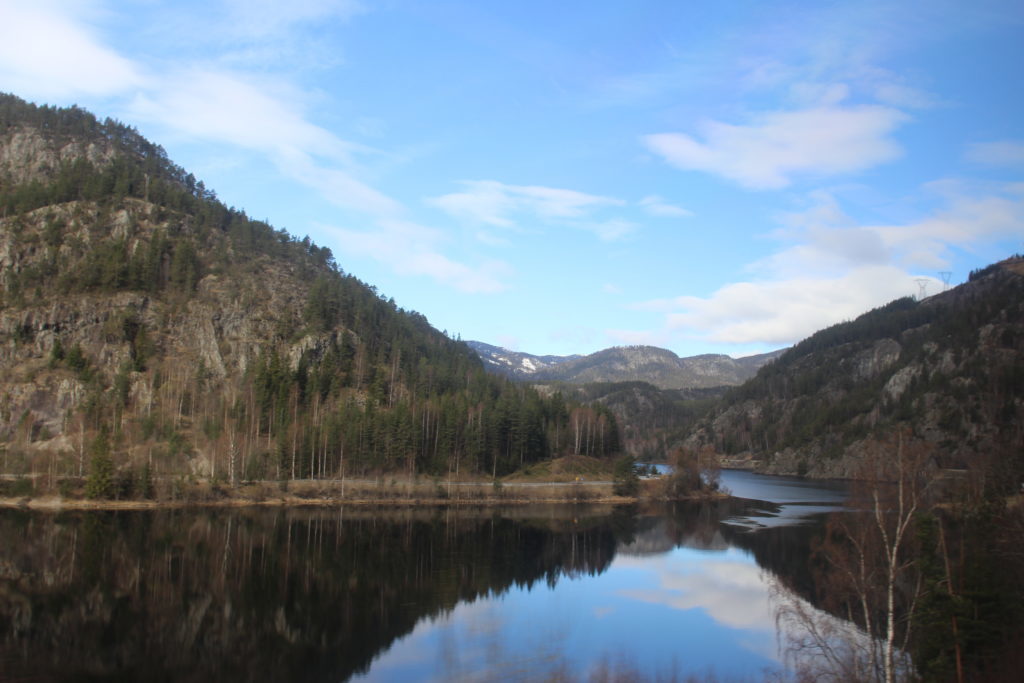 Here’s the thing, if you’re traveling from Oslo to Bergen (or from Bergen to Oslo), there’s no better way to travel. Instead of taking the standard (and boring) direct flight or train from Oslo to Bergen, we opted to splurge a bit on a ticket to the real Norway, fjord Norway, with Norway in a Nutshell. A direct train or flight from Oslo to Bergen is expensive as it is, so when you consider the value of also seeing beautiful Norwegian towns, like Myrdal and Voss, and cruising through one of Norway’s most beautiful fjords, it’s actually worth the money, and then some, to make the trip from Oslo to Bergen with Norway in a Nutshell. This is a day that we’ll remember forever, and if we’d simply taken a flight from Point A to Point B, we’d have robbed ourselves of what was probably our best day in Norway. If we’d have missed out on this once-in-a-lifetime experience to see the boundless natural beauty that is Norway, there hardly would have been a reason to visit at all. On the morning of our Noway in a Nutshell tour, we woke up bright and early, at about 7:00, and caught the train from Oslo Central Station, heading to Bergen on the Bergen Railway. This leg of the trip was about four hours long and it was the “ugliest” part of the tour. By this, I mean that as we continued on our journey to Bergen, the land became greener, the fjords higher, the mountain peaks snowier, and the water clearer; the further we traveled, the more beautiful the scenery became.

I should rephrase that statement, though, because the beginning of the ride was ugly by no means, it was gorgeous, however, the sweeping views of the tall snow-capped mountains and deep blue fjords to come were so unbelievably beautiful, that the beginning of the trip looked like a joke.

After traveling with Norway in a Nutshell from Oslo to Bergen, I completely understand why this voyage is regarded as one of the most scenic train rides on the planet, and it should not be missed. Even if you have to scrounge your pockets and your bank accounts to come up with every last penny, you cannot skip this tour. At about 13:00, we arrived in Myrdal and we changed trains for the Flåm Railway. This is where the landscape went from beautiful to mind-blowingly, insanely gorgeous. Did I use enough impressive adjectives? Well, the truth is, it’s hard to explain what I felt and what I saw as we chugged along the Flåm Railway; I would occasionally glimpse up and realize that the mountain peaks towering above me were out of sight, because they were just too tall and grand, and I was just too small. And then I’d gaze down below me to see the most precious Norwegian houses painted in reds, whites, and yellows atop green, lively grass, surrounded by water in all forms – streams, waterfalls, lakes, fjords – and little, old boats waiting to set sail. 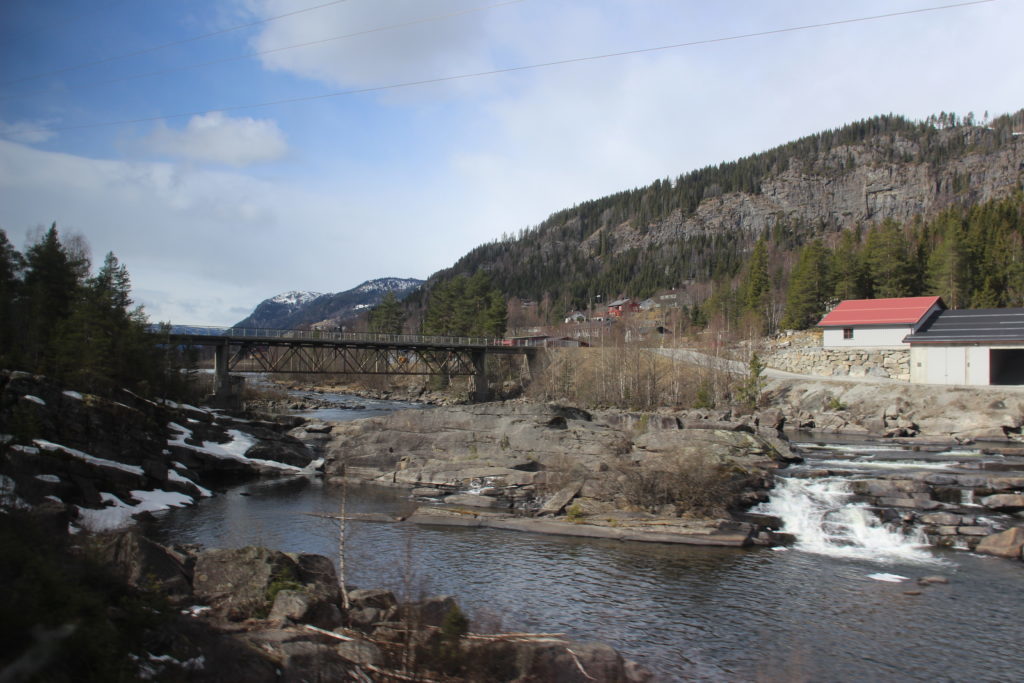 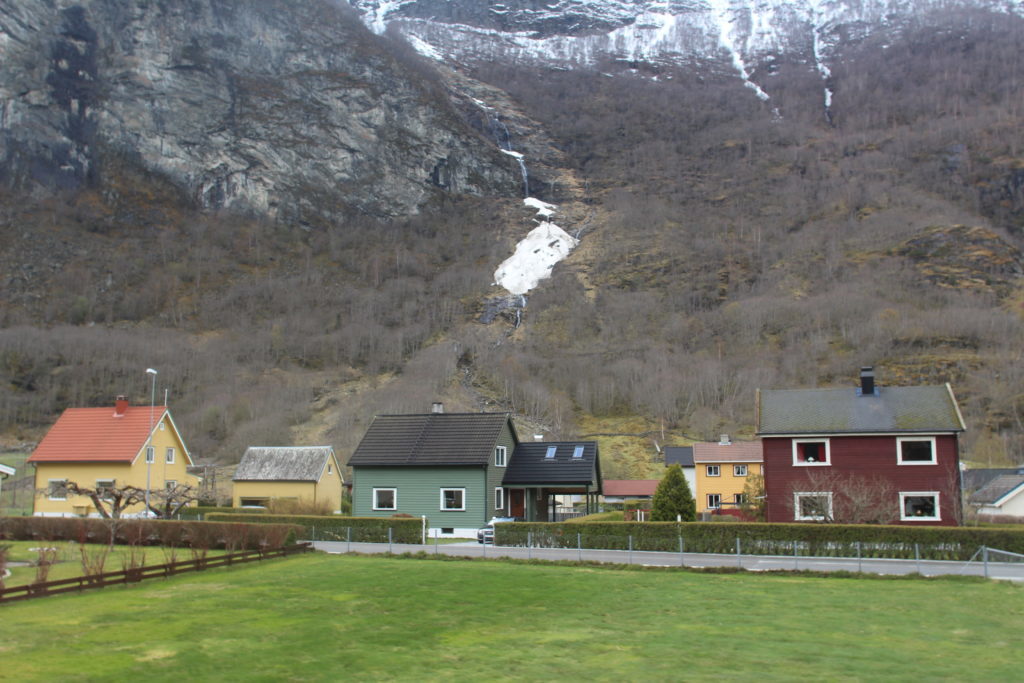 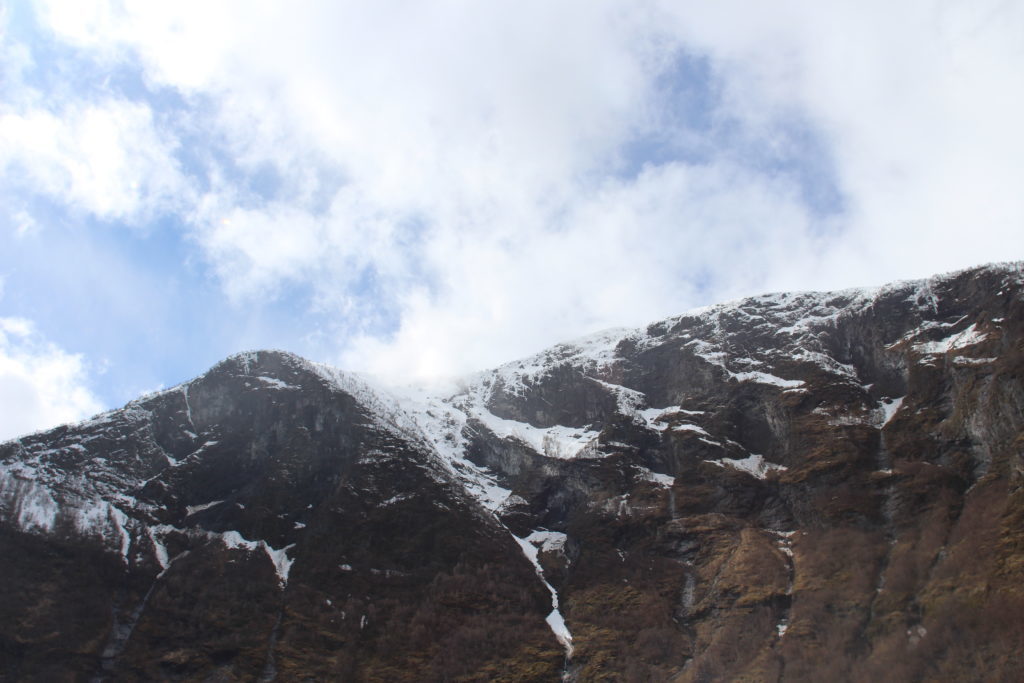 Next, we arrived in Flåm, a darling town that I hope to revisit sometime during the summer to go camping, hiking, water rafting, and canyoning. Anyway, we had a bit of time before embarking on the next leg of the trip, the fjord cruise to Gudvangen, so we perused the little town and grabbed a bite to eat. When we boarded the boat, we quickly chose seats at the front of the boat, though the seats didn’t really matter. Who wants to sit sedentarily and only see what’s ahead, when you’re cruising through the Norwegian fjords?! No one! You want to look up, down, side to side, front, back, and anywhere else you can, to make sure that you take in as much of the surrounding beauty as possible. By far, this was the most spectacular part of the tour, cruising through the fjords on deep blue, freezing water, past little towns built atop vibrant, green meadows and between sky-high, snow-dusted mountains. It does not get better than this. 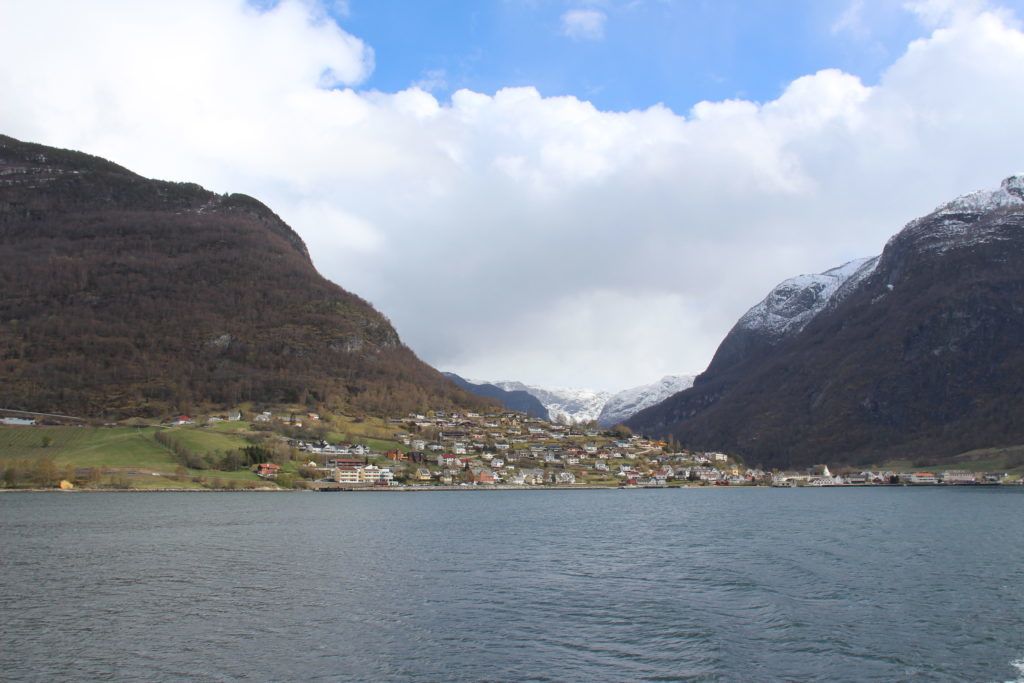 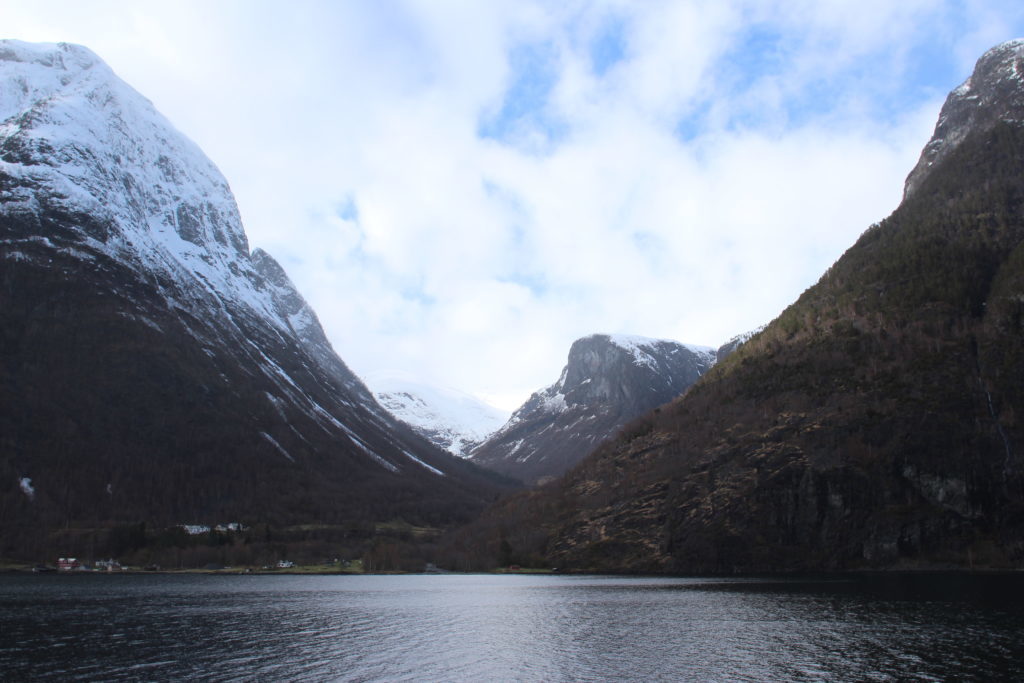 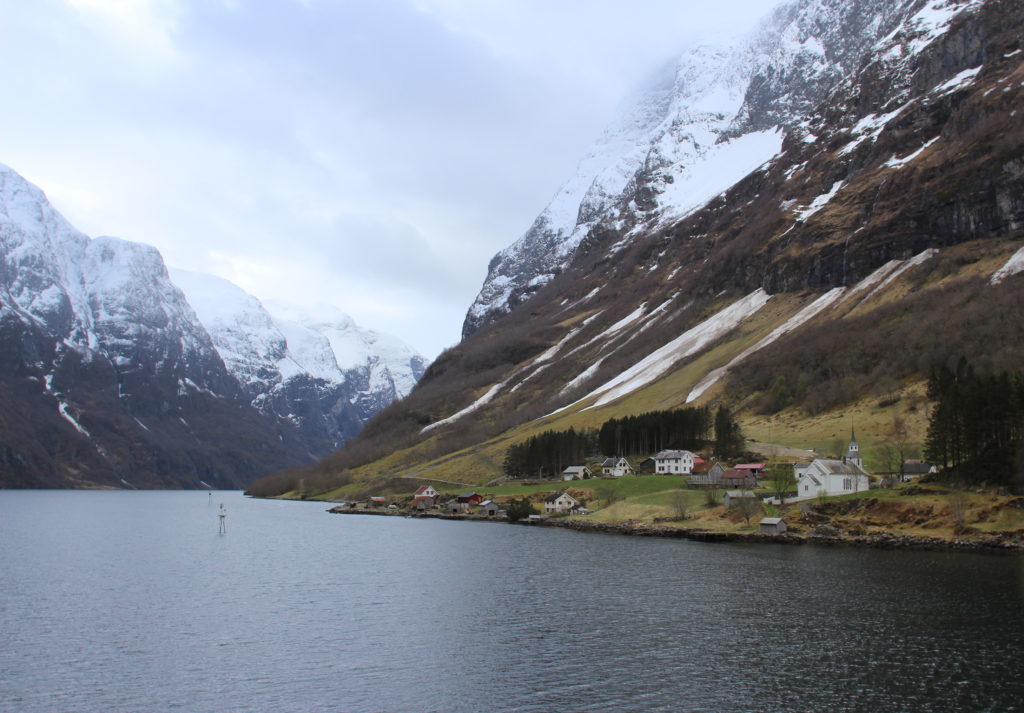 Next, we arrived in Gudvangen and boarded a bus that would take us to our last train of the day, riding on the Bergen Railway, to our final destination: Bergen. At this point, we were wiped out, totally depleted of any last drop of energy. It had already been a long day, and we still had a little while to go, but we didn’t dare nap, not in the midst of the kind of scenery that you cannot even imagine in your wildest dreams, the kind of scenery that we may never have the chance to see again. 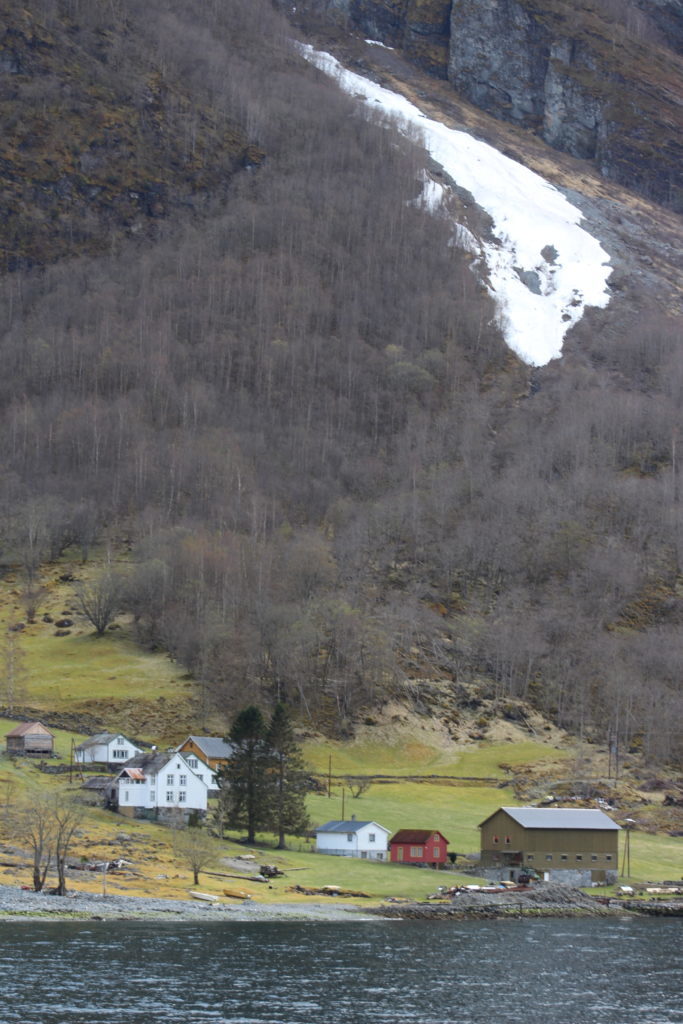 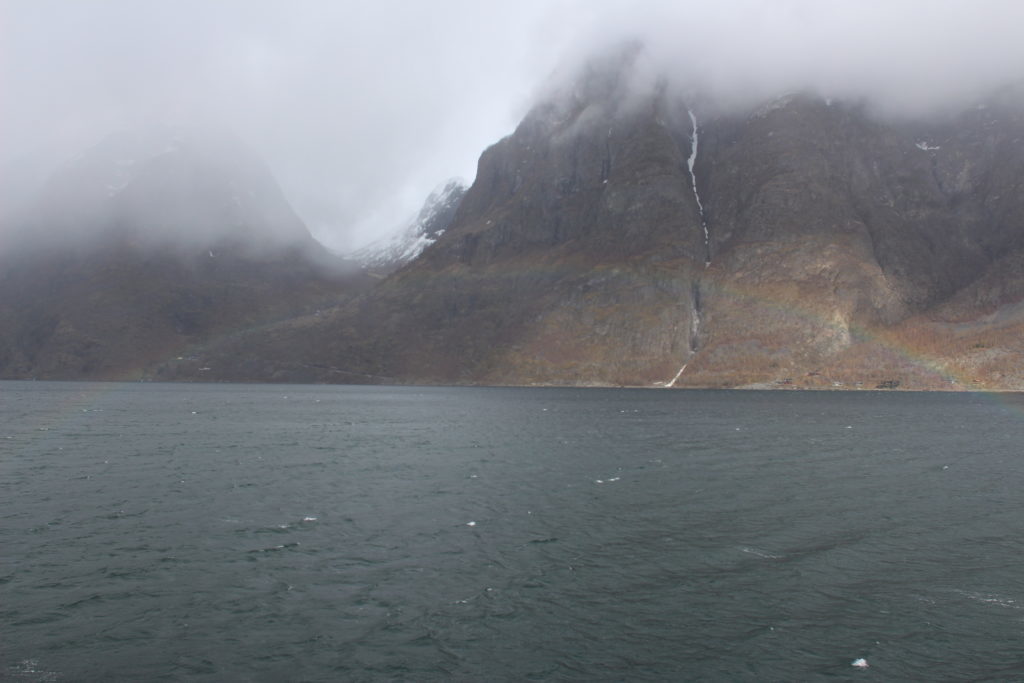 From beginning to end, our journey with Norway in a Nutshell from Oslo to Bergen stunned me. My jaw dropped an unthinkable amount of times in the presence of such unbelievably beautiful scenes that actually exist here, on our planet. Who knew such magnificence was possible? All I know is that our travel day with Norway in a Nutshell from Oslo to Bergen exceeded any expectation I had for my trip to Norway in just one day, and the experience definitely beat out a quick flight or train ride from one destination to the next. There is no better way to see Norway than with Norway in a Nutshell, and as I stated before, if you can only do one thing in Norway, this would be that thing.

Norway in a Nutshell from Oslo to Bergen itinerary Where to Stay in Bergen, Norway